Hey guys, now we’re talking about two separate Mustangs. They are the 2020 Shelby GT350 Heritage Edition and the 2021 Mach 1.

If you believe it, the Ford Mustang GT350 has been around since 1965 with the classic Wimbledon white and Guardsman blue racing stripes.

This is a slightly fun fact. It is the first time Ford has officially painted a car’s body colors as it usually happened at Shelby American in 1965 in California.

In the 21st century, you know that the GT350 has a voodoo engine with a V8 flat-plane crankshaft, 250 rpm horsepower, and a slick Tremec 6-speed manual shifting.

The good news is that the car that replaces it is a 2021 Mach 1. If you know, Mach 1 is back after more than a decade since the car was around.

What’s interesting about Mach 1 is that you can have the same Tremec 6-speed manual transmission or a 10-speed automatic that you’ve never had on the GT350 Mustang.

Wimbledon’s white and blue racing stripes are one of our favorite pieces on the Mustang Shelby GT350. 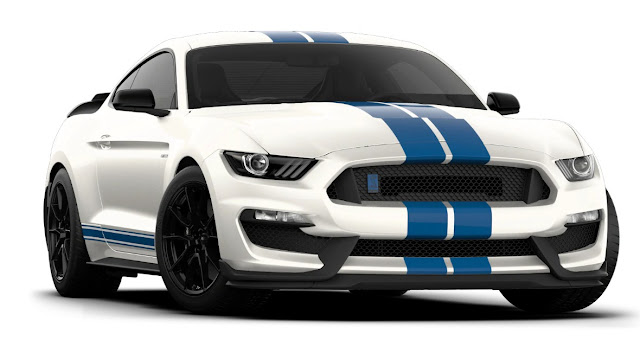 The front of the vehicle has a front fascia, hood, and side fenders, which are very different from the GT500 or other Mustang cars.

The signature old-style headlights first appeared in 2015, and they’re still on the Shelby Mustangs GT350.

In 2018, there was a refresher on the Mustang GT, and they changed the headlights that you will see on Mach 1.

Meanwhile, Mach 1 has an updated headlight design because everything is flat black, fully functional, and very good in the center grille area.

Of course, in 2019, Ford has made some changes to present the standard GT350, which looks a little closer to the GT350R specs.

You have a functional heat extractor, and they kind of drop it down instead of having the hood raised. But it’s hidden and gives such a sharp appearance.

In the bend area for 2019, you have updated wheels on the standard GT350. Now on the GT350R, you still get satisfying carbon fiber wheels.

Anyway, the aluminum wheels in the standard GT350 redesign are great. It being gloss black instead of the flat black 19 inch wheels.

Of course, you get the same six-piston Brembo calipers and a 15-inch diameter vented two-piece rotor. All of that will give the driver excellent braking capabilities.

When you move to Mach 1, some people refer to the car as specific because they are part of the GT350 at Mach 1. But we will tell you some differences between the two.

We say that Mach 1 has a unique character. 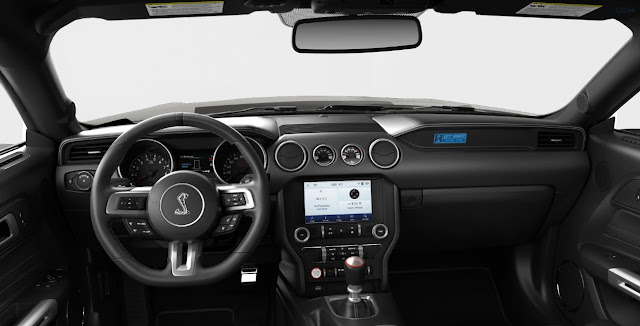 Under the sheet metal, you have a ride magnet suspension specially tuned for the Shelby GT350, and that comes standard even if you buy the 2020 GT350.

You get a magnetic suspension under the unique fenders.

The shape of this fender helps drag air out from under the hood and channel it sideways.

You have the classic guardsman blue GT350 badge, and the body lines are the same as your standard Mustang. 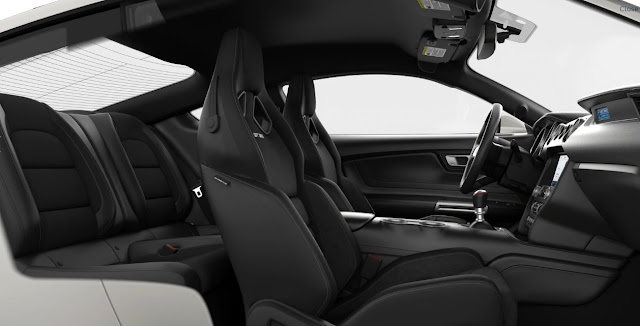 The good news is that there’s a Mustang for everyone. That’s what fans love to see Shelby, Mach 1, or GT500.

At the rear, the tires are slightly wider than the front to speed up the steering and reduce traction.

So you have the 305s, a lot fatter than the front tires. What’s great about these tires are two Michelin Cups, so that’s something new starting in 2019.

You have track day tires that are stickier than non-cup 2, becoming your Super Sports pilot tires. But you’ll love the wheel design too.

You can still see the nice huge rotors in the back and the four-piston Brembo and then wrap it off the outback.

In the new GT350, you have an updated rear spoiler. So in 2019, there are some other changes, and this is something unique. 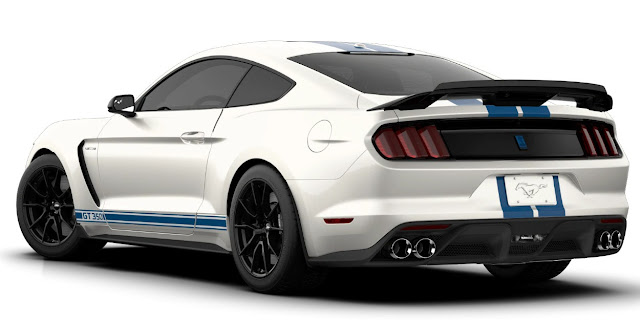 You can also get Gurney flaps if you opt for the handling pack, which attaches to the wing’s rear to provide more downforce.

They call it the Gurney flap or the Gurney strip because Dan Gurney won the Le Mans 24 hours with AJ Foyt in 1967.

Wrapping around the back, they bring the stripes down.

Of course, you have an active exhaust and even a rear diffuser unique to the GT350 that doesn’t look anything like Mach 1.

You also get a better engine oil cooler.

After all, the sad news is goodbye GT350. But let’s look at its successor: Mach 1.

With the 2021 Mach 1 Mustang, you’ll get some unique styles. If you remember, it’s been 17 years since Mach 1 was seen. A lot of people are upset about where the news about the hood is. 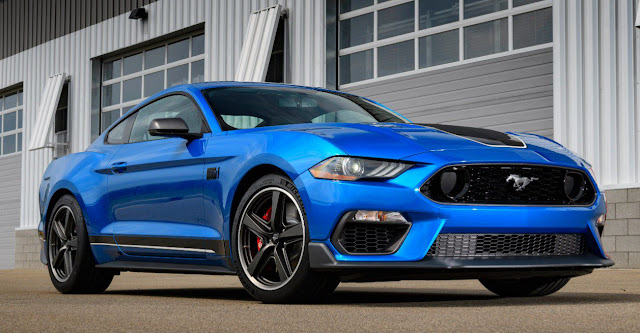 But you know what you’re still going to get for the most track-focused Mustang coyote platform.

The biggest news in 2021 Ford Mach 1 is you can have a 6-speed Tremec shifted directly from the GT350 or specifically with a 10-speed automatic transmission.

What’s unique about this Mach 1 is that upfront, you have updated headlights. 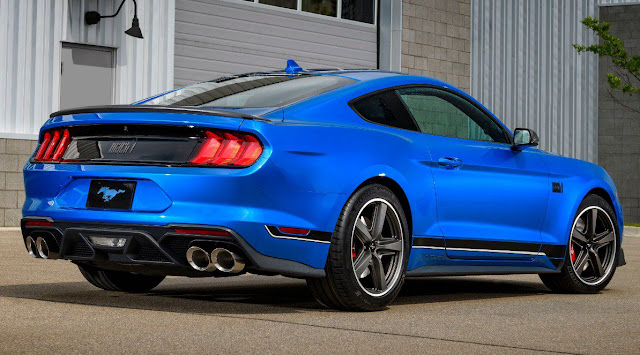 In 2018 they refreshed the headlight design, which is different from the front fascia of the 2020 GT350. It’s a unique look on excellent dark metal. So you will often see gloss black or flat black.

You’ll love the way they use a flat metallic gray, fully functional. You get an extra engine oil cooler and transmission.

What’s challenging now is a cooler transmission when Mach 1 has a 10-speed auto.

But you also get diff coolers.

So if you have the GT level 2 performance pack, did three laps, and you’re diff overheated, this won’t be the case.

That’s why the Shelby GT350 is a more reliable track weapon because of those coolers.

You’ll also love the way they took that splitter and brought it aside at Mach 1. 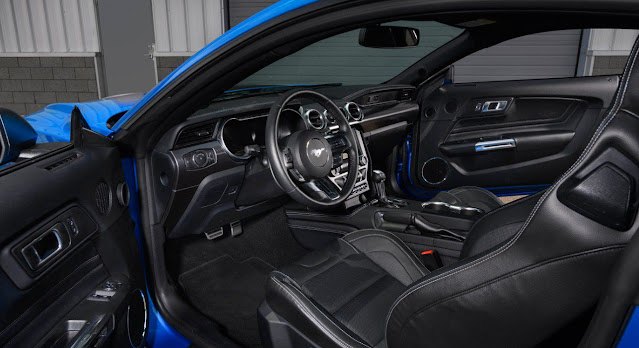 You can see how they do aerodynamic work because they’re not like they stick it with glue and tape. Mustang thought about it, and it will give you extra downforce.

On the grille, you’ll love the fully functional gloss black finish. The flat metallic gray pony in the center is beautiful. We love that Mach 1 doesn’t only gloss black but also a unique grille.

Even the underside isn’t glossed black but a flat metallic gray. The front splitter extends, distinct from the level one and level two performance packs or Shelby GT350.

The one thing missing is the raised area for the hood scoop. Do you want that back?

However, we like the classic Mach 1 line towards a flat black windshield with a black gloss hint.

The wheel and tire settings are also slightly different. So you’ve got 19-inch wheels with a different design with a flat metallic gray machined aluminum. 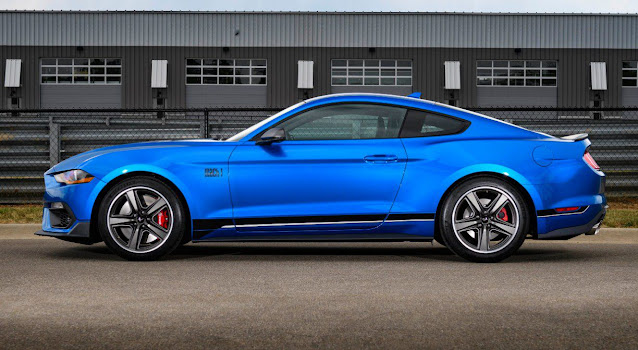 Those wheels are from Mustang bullets, just painted differently. But they are a flat metallic gray looks a lot better than the Mustang Bullet wheels, which work at velocity blue.

You also run the Michelin Pilot Sport 4S. So if your Mustang wants to see a lot more road duty than track duty, these tires still provide phenomenal grip.

Those tires tend to wear out a little quickly, especially if they have a massive lead foot, and the driver likes throttle fun.

But you have massive six-piston calipers like before with slightly smaller rotors than the GT350.

However, under the sheet metal, you get a proper magnetic suspension and the same GT350 intake to raise 480 hp.

That’s the same amount of power as a Mustang bullet. 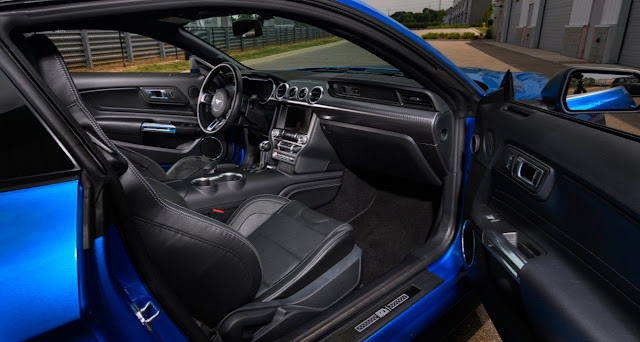 The side stripes down in black with white side sills, precisely the same as the Mustang GT, Mustang EcoBoost, or even the Shelby GT350.

You have 275 wider wheels on the back, but they are not as wide as the tires on the Shelby GT350.

There are also no Brembo calipers. You only have standard slide calipers at the rear and tiny rear rotors.

After all, you have 373 gears, like the GT350. Not only that, if you want to go to the track, you will get a differential cooler to help keep the temperature down.

If you like a smaller spoiler on the rear side, the Ford Mach 1 has a flat gray on the trunk lid spoiler, which is very clean.

You also have the Mach 1 badge in flat metallic gray and a quad-tip exhaust similar in shape and size to the GT500.

Apart from that, the rear diffuser looks unique with the diff cooler behind it.

Now, what is the most striking part? We think having that ten-speed will open the door for people who want the extra performance from a Mustang product.

In any case, we’re happy to say goodbye to the GT350 and welcome back to Mach 1. There’s always a lot of interesting going on with Ford and its performance.