Home Chevrolet Chevy Camaro ZL1 1LE Has Outstanding Performance For The Money
The 2019 Chevy Camaro ZL1 1LE is a fire-breathing supercharged track beast. As you may know, the Chevrolet Camaro has been around since 1967. After all, the new ZL1 1LE car has outstanding performance for the money. Since so many iconic models, the ZL1 badge has been around for a long time. 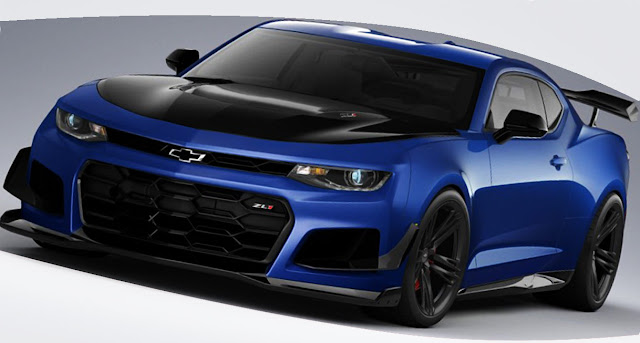 But you know what’s resurfacing in a big way in the 21st century? We’re talking about supercharged V8 power. The ZL1 1LE first appeared in 2018, and basically, the 1LE package is a track-specific package with all the options dating back to the 1980s. In a detailed response to SCCA’s showroom stock racing, they thought if people could buy the Camaro and add the 1LE option, it would help the car become a more reliable track monster.

It’s not just about extra power but wheel brakes, bodywork, custom suspension, and everything. If you know the skills to drive around the racetrack, it will help you turn really fast and even challenge a sprinter like Ferrari 488. Now the question is, is the new Camaro ZL1 1LE the best bucks value for a muscle car in terms of the amount of performance you get? Is this muscle car the real supercar slayer?

When you choose the 1LE, you will get a completely different front fascia from your standard ZL1 and certainly very different from the regular Camaro. You’re still going to get the same headlight design. It looks good. People will hate seeing it in the rearview mirror following behind them on the race track. You’ve got LED daytime running lights and xenon headlights set up. 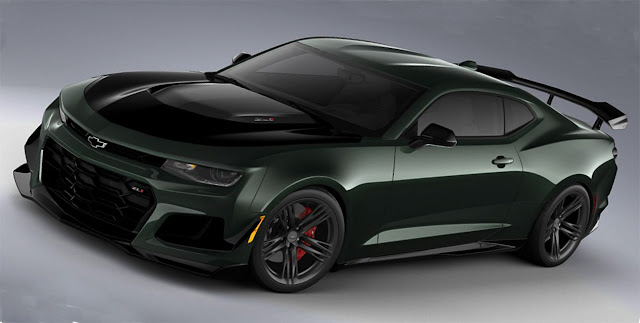 As you drop down, you get a vast functional air intake. There are lots of radiators if you can believe this. Everything is open to let in as much air as possible. You have canards to help give you the downforce because, on the track, you want to get extra downforce to help the car turn and be more stable at high speeds. Plus, you get a large front splitter that sticks out almost like a large table.

At the front, it could be your favorite front end on any Camaro. Other than the Z28 that was produced in 2014 – 2015. They really found it by removing the Chevrolet bow tie and hollowing out the center,  allows more air to enter the front radiator for maximum cooling. 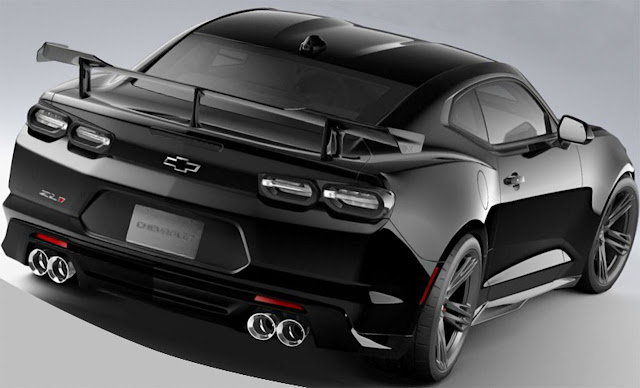 You get a fully functional ventilated, ram-air scoop for perfect cooling of your brakes. The splitter is about scooping up the air, like a big shovel, circulating air towards the vehicle’s front. You are trying to reduce the air entering the bottom side so that you have a strong downforce. You don’t just want big wings at the back; you want what’s in front.

On the hood, you’ll get a large carbon fiber heat extractor with the ZL1 badge. As you came around the bend, guess what? There’s no MagneRide suspension, so that’s a bad thing? But if you’re on your track day, the Chevy Camaro ZL1 1LE has an excellent Multimatic suspension system.

You have forged wheels; they actually weigh 17 pounds less than your standard wheel. Also, they have less rotating mass going to give you quicker steering.

You do have large, six-piston Brembo calipers with the 1LE badge and two-piece rotors. Yes, the Camaro ZL1 1LE is a rocket launcher that will be faster than the Ford Mustang Shelby GT350 or GT350R, and we’re not shy to say. There is a specially tuned suspension for this vehicle behind the bodywork, and you can’t get it on any other. 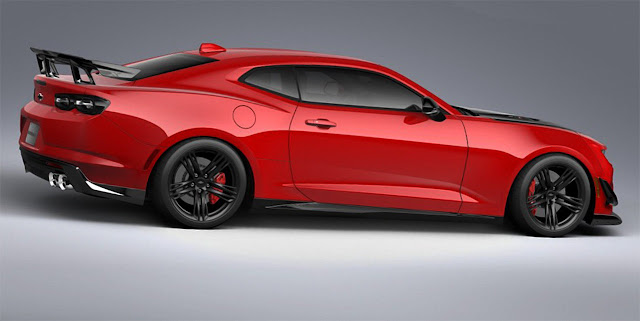 The side exterior is clean, with no badges at all. You’ll enjoy a side sill extension, particularly for the ZL1 1LE, that will help circulate air to the underside. From the outside, we’ve always loved the look of the Camaro; it really gives the concept car a sharp look.

On the back, there are steamrollers, 325 wide, and 19-inch wheels. You can also have 20-inch wheels for track tire fitment, but it’s better to use 19″ wheels with a nice size 4 piston caliper.

At the tail end, you have a full carbon fiber rear wing. At speed, this creates over 300 pounds of downforce. It’s a pedestal style, but unfortunately, it lacks adjustability. Also, on the back, you have a swimming goggles tail light style, something’s changing for 2019. Maybe it’s not your favorite, but we thought you’d go with it anyway because it’s a supercharged beast track.

You get a quad-tip exhaust with an active system that can make it louder or quieter. For some reason, Chevrolet has pinned the tail on the Camaro with their badge. We don’t understand why they put the ZL1 badge not on the actual trunk. Also, you want the diffuser to be a little more aggressive, especially with the large wing size.

You have a Tremec 6 speed manual transmission in the cabin, with automatic rev-match downshifting, which you can shut off. You get an Alcantara shift boot, and the throw is really short. Another fantastic big cut is the beautiful Recaro seats with the ZL1 badge, perforated with leather trim on top. Even the nice size that supports the bottom and top will hold you in place. 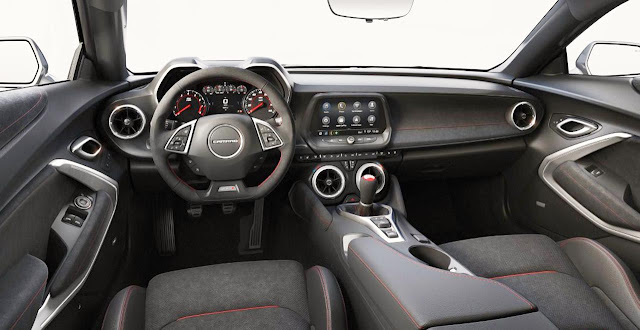 What’s even more significant than the real Shelby is that you have heated and ventilated seats. So if you want a cooled backside while on the track, you can get cooled down, and also, everybody gets a lovely red seat belt. 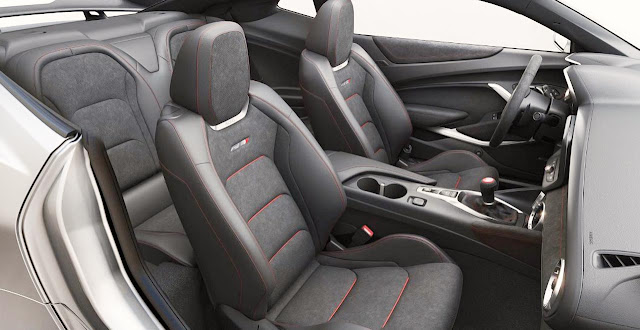 However, we are confused about why on the unique Camaro tracks there are even rear seats? We thought that it would even lose weight if that wasn’t there, maybe another 100-150 pounds, depending on how much insulation and trash was under the seats.

What makes the Chevy Camaro ZL1 1LE truly a muscle car performer? Must have three pedals. It’s great to have the clutch, brakes, and throttle with a bit of brushed aluminum.

But we wish the dead pedals were just a little bit large with a lovely brushed aluminum, like on the Shelby GT350R.

Also, you have a beautiful Alcantara wrap steering wheel with a flat bottom. The gauges are reasonable. You have a large digital display in the center, an analog tach, and an analog speedometer. You have different modes, like Sport, Track, or Snow. You may even be wondering, “What are the paddles for?” Well, that’s to turn off or on your automatic rev-match, which you might not like. Those paddles are too easy to get hit accidentally while you’re driving. So, you want them to put the button somewhere else, but it’s still nice to have that feature anyway.

You have two hydraulic hood struts under the hood, and you’ll find the shock absorbers already installed. Of course, no wires leading to them as it is automatically. They’re not MagneRide suspensions and no boosters mounted on the top of the supercharged engine for lack of space.

It does have an electronic limited-slip differential that dampens the Multimatic spool valve at all four corners, actually 23 lbs lighter than the standard MagneRide suspension.

The car as a whole is nearly 100 lbs lighter, and on the skidpad, it can generate 1.10 g of lateral force. It will definitely be faster than Challenger Hellcat, Challenger Hellcat red-eye around the race track, even faster than GT350, GT350R, but for Shelby GT500? Well, it really depends.

The windshield is closer to your face, and it’s angled on a more significant rack than Shelby. Performance Data Recorder is a great option to have, especially if you take this to the track. You will be able to sort all the footage yourself to make you a better and faster driver.

Having 650 hp almost fulfills all the criteria, and you also have firm suspensions. But what comes with the territory, we think you have no problem with it.

We just know for sure that compared to the MagneRide suspension, it will shake your stomach a little more. However, the steering feels great. You’ll love the supercharger. The traction control is working overtime as if your hands are just holding onto the front axle. It’s as if there is only one axle, and you’re the one who actually turns it with your physical hands.

The car transitions from left to right are very smooth, and all the sounds or seats keep you excited. We think a big plus is having this type of gearbox as it actually allows for some excellent fast shifting and what you need while on the racetrack. The automatic gear shift is perfect, the brake pedal has a good consistency feel, and the feedback communicates very well.

The MSRP starts from $63,995 (6-speed manual includes Hill Hold feature and Active Rev Matching), and for 2020 with the auto transmission starts at $65,590. At the Chevy Camaro ZL1 1LE price point, you are getting a lot of car for the money.