Home Car Maintenance Car Cooling System Maintenance Guide
Every car has a cooling system. Some foreign cars, such as rear-engine VW’s, have an air-cooled system that is relatively trouble-free, but most American-made cars and many foreign cars have a combination of liquid and air cooling systems.
Unfortunately, all the heat produced by an internal-combustion engine cannot be utilized as energy. The excess heat above the average operating temperature must be removed; it will damage and even destroy the engine. 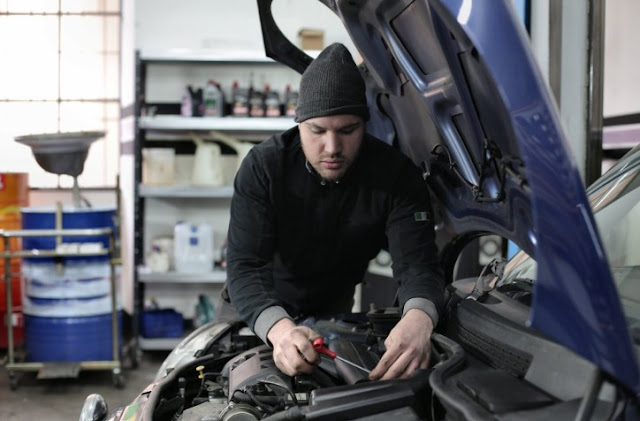 Overheating of the engine is a problem in all areas of the country, especially in those areas where summer temperatures are high.

Simple care and maintenance of your cooling system will help you avoid overheating problems.

The cooling system is essentially uncomplicated. A standard system consists of a radiator with cores through which water flows to provide the highest air contact and heat discharge.

Other components are a fan, a belt-driven water pump on the same shaft as the fan, a thermostat, hoses, coolant, and a pressure radiator cap. Most cars manufactured before 1972 have a conventional cooling system.

Some newer cars have a closed cooling system.

Keep the outside of the radiator clean, remove bugs, leaves, and trash from the front of it, and check the v-belts. If they are obviously quite worn or frazzled, go ahead and replace them.

Do not wait until they break, or you may be severely inconvenienced. Preparing for a long trip takes spare belts with you and tools for replacing any broken belts.

The coolant is an essential part of the cooling system. Refer to your Owner’s Manual to find out what coolant is recommended for your car.

The antifreeze-and-water mixture freezes at a lower temperature and boils at a higher temperature than water. Always use permanent type (ethylene glycol base) antifreeze.
The colder the temperature, the more antifreeze you will need. Even in mild climates, some of the newer cars require a mix of antifreeze and water all the time.

The coolant level in your cooling system should be checked every two weeks or every 500 miles or before a long trip.

The water you put in your radiator ideally should be free of alkali or other minerals.

Read:  How to Fix a Slipping Transmission Easily
Since most service stations use tap water, you may want to be on the safe side and use rainwater or distilled water in the radiator.

For every two years, your car’s cooling system should be drained, flushed out with clean water, and filled with new antifreeze. You can have this done at a service station or do it yourself.

The two original hoses for your cooling system are vital.

One hose leads from the engine to the top of the radiator, and the other leads to the bottom. These hoses will rot with regular use.
When they become soft and flabby (usually after about two years), they were changed. Changing the hoses should coincide with flushing out the cooling system.

When an engine overheats, the temperature indicator light on the dashboard lights up.

Stop immediately! With luck, the engine has not yet been damaged but continued driving indeed will damage it.
Open the hood and look for a broken v-belt.
If the v-belt is in good condition, the coolant may be less. Don’t open the radiator cap of a hot engine.
Use a hose to spray water on the radiator to cool it before opening the radiator cap.
If the volume is low, crank the engine and let it idle while adding coolant.
Never add cold liquid to the radiator of a hot engine that is not running. Doing this may damage the engine.

If the fan belt is neither loose nor broken, and the liquid coolant level is correct, then the next most likely problem is the thermostat.

A thermostat is a small round device, about two inches in diameter- or slightly larger than a silver dollar-which is mounted under a metal bucket where the top radiator hose attaches to the engine.

This allows the heated liquid from the engine to circulate through the radiator, where it is cooled.

The car’s movement and the rotating fan cause fresh air to pass through the openings in the radiator, cooling the liquid, which then flows to the engine block and other engine parts picking up the heat again.
Read:  Car AC Filter and Evaporator Maintenance Guide
In this moving process, the thermostat helps maintain the proper engine temperature by opening and closing—correct engine temperature results in better gas mileage, better acceleration, and less engine wear.

If the engine still overheats, the trouble may be that the radiator core is full of rust and corrosion and must be boiled in a cleaning solution or rodded out.

This is a job for the professional radiator shop. Another possible, though the remote, problem is a defective fan clutch. In which state the pulley turns, the fan does not.

Question: Is the cooling system intended to keep the engine to have lower a temperature as possible?

No, it retains the engine at the proper operating temperature.
Remember that overheating of the engine leads to untold troubles, all of which can result in expensive repair bills.
Obviously, you should make every effort to see that your engine does not overheat.

Modern cooling systems are use pressure types, and your coolant will be lost if the cap leaks. The radiator flip is designed so that it has a pressure-relief valve.

After the pressure in the radiator reaches a certain point, some of the pressure is released. When you check the level in a conventional system, make sure you replace the cap tightly.

The water pump should last a long time, but eventually, it will wear out and need replacement. Leaks and/or squeaky noises are symptoms Ihiil the water pump is approaching the time of trouble.

The only thing you can do to extend your water pump’s life is to keep antifreeze or a rust preventive solution in the cooling system at all times.

If you have an older car that does not require year-round antifreeze, you may decide to flush the cooling system in the spring and put water alone in the radiator.

Some modern cars, such as the Chevrolet Vega and Ford Courier, have aluminum blocks.

The proper concentration of the antifreeze recommended by the manufacturer is especially vital in aluminum-block engines to prevent corrosion.

The fan typically lasts a long time and seldom gives trouble. The fan belt may break, but you can have a mechanic replace the belt or do it yourself.

Car Maintenance Schedule by Mileage or Time [A complete Guide]

Ram 1500 8 Speed Transmission Problems [How To Fix It]