Home Car Maintenance Car Care and Maintenance Tips for Winter and Cold Weather
Drivers in northern states where temperatures frequently go as low as 0°F or colder have particular problems. This article will help those drivers recognize and overcome the difficulties.
Car care in cold weather is especially urgent. Check to see that the heater-defroster, windshield sprayer, and windshield wipers are working before cold weather starts.

Put a concentrated preparation of an antifreeze solution or a deicer in the windshield washer container. 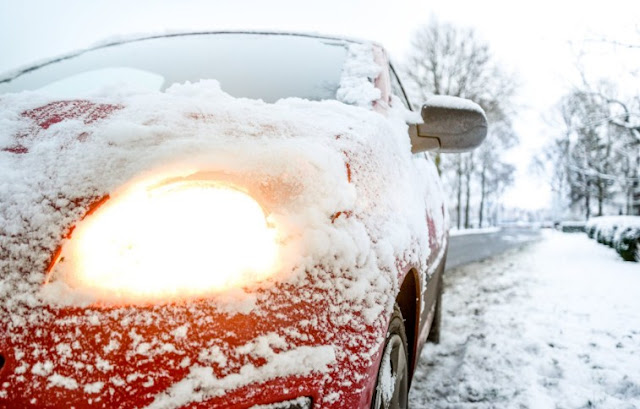 Keep permanent antifreeze (ethylene glycol base) in your cooling system in sufficient concentration to protect your engine at the lowest temperature expected locally.

The term “permanent antifreeze” means only that the solution will not boil away at average engine temperatures; it will eventually lose its usefulness.
A service station attendant can use a hydrometer to determine the level of concentration in your car.
If your cooling system needs more protection, drain one or more gallons of coolant from your radiator and add antifreeze as needed.

Refer to your Owner’s Manual. Some manufacturers recommend a fifty-fifty mix of antifreeze and water for year-round operation.

Flush out the cooling system and change the antifreeze every two years.

The best water to use with antifreeze for coolant is either distilled water or rainwater. Most groundwater contains minerals that form scale in the engine, as does artificially softened water.

The two hoses from the engine to the radiator should be changed when they get soft, usually about every two years; do not wait until a hose bursts.

Watch for any leaks in the cooling system. A milky appearance in the engine oil may indicate that antifreeze is leaking internally. Such a problem is severe and requires a mechanic.

Refer to your Owner’s Car Maintenance Manual, and put oil in your engine recommended for cold weather.

ELECTRIC HEATING OF THE ENGINE

In areas with freezing weather, you can install an electric heating element in the cooling system to warm up the engine on snowy days.

This may be a tank heater, a head bolt heater, a block heating element, or something similar. When you buy a new car in a northern state, you can order the vehicle equipped with such a heater from the factory or have the heating unit installed when you buy a car from a dealer.
A thermostat in the heating device maintains the proper temperature. The cord from the heater extends near the face of the radiator.

So the cord may be plugged into an electric source. Some parking area facilities in northern states have a 115-volt outlet, so you can plug in your heater cord and keep your engine warm while the car is parked.

You can raise the engine’s temperature in another way.
Put the car in a garage, place an electric light bulb under the hood, and put blankets or a tarpaulin over it.
A heated garage is best, but even a garage attached to the house provides your car with a warmer temperature than a garage that is not connected.

If you must park outside during frigid weather, park your car with the engine facing away from the wind.

Cold weather puts additional strains on the electrical system, and the system should be checked carefully in the fall.

Cold temperatures lower the power output from a battery by reducing the electrochemical reaction rate.
Simultaneously, the power required to crank the engine increases because cold oil is thicker and has more “drag” than warm oil.
Extreme cold may freeze a weak battery and crack the battery case, so keep the battery well charged.
Usually, the heater and headlights are used more during the shorter winter days, reducing the alternator power possible to restore the battery. Replace a weak battery as cold weather approaches.

The new battery should be at least as powerful (amp-hour rating) as the manufacturer’s recommendation for your car. Still, a more powerful battery will give an extra reserve of energy.

In freezing weather, the ignition’s battery energy may be reduced because of the additional amount of power required by the starter.

The resulting weaker spark may not ignite the colder fuel-air mixture, and your engine will not start, especially if the ignition system is powerless or the engine is poorly tuned.

Therefore, have your car tuned before severe weather sets in.

You will be driving more at night and in low visibility conditions in winter, so check the lights frequently to ensure all are in good order.

Car Maintenance Schedule by Mileage or Time [A complete Guide]

Ram 1500 8 Speed Transmission Problems [How To Fix It]