Facebook Twitter
We’ve covered a lot of excellent places to find affordable classic cars like Craigslist, but how do you find those unadvertised hidden gems that no one else knows about? The truth is, some of the best classic car deals I’ve ever heard about were for cars that were never advertised anywhere, the buyer was found through word of mouth, or perhaps an old car story was told, someone investigated, spoke with the owner and put a deal together. But how do you get plugged in like this?

Get plugged in by immersing yourself in the car hobby. Attend car shows, subscribe to magazines, sift through eBay auctions, but above all, talk to people. You need to let people know that you’re into cars. Tell your friends, family, neighbors that you’re always looking for something attractive, different, enjoyable, and classic. I’m one of those guys who comment on the old classic filling up at the gas station and ends up talking to the guy for 15 minutes. That’s the kind of guy who says, “My buddy’s got a ’56 he’s been talking about selling, do you want his number?”

People need to think of YOU when they go over to their great uncle’s, and he tells them he’s finally going to get rid of that old convertible that’s been sitting in the garage since the 1970s. People need to think of YOU when they’re driving out in the country and see an old British sports car with a for sale sign in front of it. Exude this sort of genuine interest, and before you know it, cars for sale will start coming to you.

It’s no secret to my friends, neighbors, countrymen that I’m a car guy, it just seems to what I end up talking about with people. If someone can relate a subject to cars, it will always hold my attention. I’ll mention a few examples of how word of mouth has presented people I know with several great opportunities recently and me.

Most recently, just this week, in fact, I got an email from my neighbor’s ex-girlfriend regarding a 1958 Triumph TR3A she was given by her uncle some years ago. Now, my neighbor and his girlfriend went their separate ways the better part of a year ago, but she remembered several conversations we had about her little TR3, I told her to let me know if she ever wanted to sell it. Wells, she wants to sell the car now, so she got my email from my neighbor and sent me some photos of her TR3 via email this week.
The fact that I don’t have the $20,000 the car is probably worth, or any garage space for it is another story entirely. The point is, after a brief conversation across the back yard fence almost a year ago, she thought of me first when she started thinking about selling this car.

I was glad to hear from her. Apparently, they have been “kinda, sorta talking again… and are maybe going to give it another try” with the relationship. I wish them the best of luck, I thought they made a great couple, and they were fun to grill out within the summertime. Who knew you could have such hope for romance here at Affordable Classic Car Reviews? Just wait until my wife and I co-author the series “Best Back Seats – Classic American Sedans 1955 – 1959”. That should be a steamy series.

The second story is about a guy I met at work. He came into Feldmann Imports in January of this year to visit the parts department. He came in driving a mid-90s Mercedes-Benz sedan, he needed to go to the parts department. I walked him over that way as we started talking about cars. He mentioned that he had an old Porsche 911. Of course, my ears perked right up. He described a 1982 911 SC Targa, red with a tan interior. He had an old 1970s era Mercedes SL as well, my kind of guy. I told him that I’d love to get a 911 SC, it’s a great starter 911, relatively inexpensive, and the engine in those cars is thought to be one of the most robust of the era. “Well, how about I bring it over for you to have a look at this summer?” he offered.

Fast forward to mid-June. Just another day at work in the early summer. I walk outside and see a little red 911 SC Targa in the parking lot, and another salesperson says to me, “Hey Tobin, the guy who drove up in that Porsche is looking for you.” So we finally found each other and had a look at the car. He wanted to put his 911 on the market to make room for something else he wanted to buy, he remembered our conversation six months earlier and came to me.

He offered me that car for $12,000… 88,000 original miles, Carrera chain tensioner upgrade had been done to the engine as well as the airbox upgrade. He said if I didn’t want it, he was going to list it on Auto Trader and Craigslist for $14,000 to see if he could get a little more for it, but it was mine if I wanted it for $12,000. Again, the space/money continuum was not correctly aligned for me at that moment. I thanked this gentleman profusely for thinking of me and for letting me take it out for a test drive with him. That’s such a great handling car, and fast. I have no doubt that was the right car for me, it just wasn’t the right time. 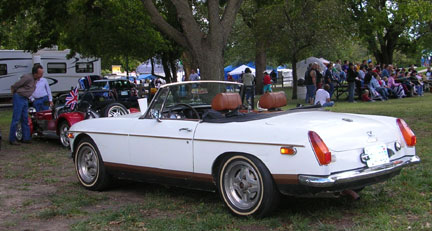 The last story I’ll tell here is how my father bought a completely original, rust-free MGB, with 28,000 or 32,000 (something quite low) original miles for less than $3,000. It’s pretty simple, really. Anyone who knows my dad knows he’s as into cars as I am, that’s where I got this fantastic affliction. A friend of my parents tipped him off that their neighbor had an old British sports car in the garage they wanted to get rid of. It had been advertised in the paper for weeks with no interest. British sports cars aren’t necessarily a hot commodity in the small town in central Kansas where they live.

My dad decided to go over to the seller’s house with his friend to have a look at the car, it was just down the street. What he found in the garage was, in his words, “The driest, most rust-free MGB I’ve ever seen,” and believe me, he’s seen a lot of them. He’s probably owned 5 of them over the years. This was an original car, this was the original owner, the lady was selling it for her daughter.

It’s a 1974 model, the last year with the excellent looking chrome bumpers, but it didn’t have wire wheels. It’s not the best year for an MGB with all the smog equipment it’s got on it, but it isn’t the worst year either. I don’t remember every detail, but the lady offered it to my dad for $2000. He actually felt wrong paying so little for such a great car, so I think he paid her like $2,500 for it, started it up and drove it home. It had been sitting for a long time, so he had to do the brakes and some other things to the car, but it’s an incredibly original, low mile, rust-free car.

He got this car thanks to his friend that knew his neighbor was trying to sell “an old car.” He wasn’t even looking for an MGB, but when a great opportunity comes along, sometimes you just have to take advantage of it.

By letting people you come into contact with know you’re always looking for another fun car, they will think of you when they see or hear of an opportunity. These are generally opportunities that don’t come up for others, you can often get to cars before they go on the market.

These cars will likely be close to home and comfortable for you to go look at… and in the end, as much as we think the car hobby is about cars, it’s really about people. The friends you make while searching for fun classic cars, the friends you make while driving them. It’s all about people. I love being the person my friends think of when they see their neighbor push an old covered car out of the garage, and over time it’s put me in contact with some beautiful cars and even more excellent people.
Facebook Twitter