2021 Jaguar F-Type: Faster and Better on The Road

Facebook Twitter
2021 Jaguar F-Type is a car where many Jaguar fans have waited a long time because it was the first real sports car of the brand. Since then, the vehicle has received many awards for its unique shape and extraordinary driving skills.

Now, Jaguar presents the new 2021 F-Type with many changes on the front bumper.


On the latest models, the Jaguar has an entirely new front bumper with a larger grille.


It also has beautiful shapes and F-Type signatures on the lower grille frame. This car has many thinner automatic headlights with extended LED technology or pixel LED lens and dynamic indicators.

You need to see the new hood because you will find air outtakes in entirely different positions and shapes. So, this is an optimization for aerodynamics and gives the big engine more fresh air.

The F-Type now has an extended 18-inch alloy, but the R-type comes with a 20-inch alloy as standard.

When you look at the rest, on the side you will not find so many new things. But you will find a leaper, instead of a Jaguar's signature and this is real air outtakes.

You will find the same door handle with very well shaped shoulders on the rear that looks like its predecessor.

So how significant is the improvement of this new model for Jaguar? It's always crucial for sports car manufacturers like Jaguar, and this is surprising because the late F-Type is much better. You know, it was a car that was also sensational before with interesting design aspects and technical viewpoints of the aero, suspension, and engine.

Maybe you don't expect there to be so much room for improvement because this car was perfect before. But it's quite a bit better now, and it's a lot of fun when driving it.


When talking about the specifications and technology of the Jaguar F-Type, you will know what they are doing to make it faster and better on the road. Not only do they know about the picking points, wishbones, and shock absorbers, but they do much more than that.

They make the right arrangements for shock absorbers and springs. Then, the steering wheel does the job the right way at the right speed and load. Now, the new rim and tire are new developments so that the combination has succeeded in making a pleasant difference to drive it.

Just catch a glimpse of the Jaguar F-Type, and you will be impressed by the identical dimensions, but the appearance is entirely different. You will realize that the Jaguar design team gets a good score for what they have achieved.

At the rear, there are new taillights as standard with LED technology. Depending on the model and level, you will find dynamic indicators.

The taillights still have beautiful lines and look much softer. You will always find signature taillights, smaller in size, reminiscent of the i-Pace electric taillights.

More importantly, the F-Type now has an entirely new rear bumper with a different exhaust system. If you have a basic model, you will have a big one in the middle, while in the R version, you will get four pipes but with arms.

The interior of the F-Type now has a booster feature of its predecessor. It also gives an impression because there is a significant barrier between the driver and the co-driver. It gives the figure of a sports car and this underlined by the big handle.


What's new is that the F-Type now has a full 12-point 3-inch digital cockpit that starts with a large RAF meter in the middle. But you can fully configure it as you wish, and this means you can have two round instruments, or you can have a complete map directly to the cockpit.

At the top, there is a 10-inch screen as a touch screen. The infotainment system is a touch pro with all the new technology on board, and of course, there are Apple CarPlay and Android Auto features.

For the sake of giving more "Jaguar feelings," you will find perfect stitches on the door panels on the seats, but this depends on the trim level or the engine you buy.

To make it a real-check, on the headrest, you do find "the jumping Jaguar," too.

To find the right balance between analogs in the digital world, so under the infotainment system, there are three round knobs to work with AC. As in its predecessor, you will find something a bit similar to a jet or to control things like the air conditioner, heating, together with an excellent gearshift knob.

F-Type is a real sports car, and Jaguar is going to continue that mission, but at the same time, they are maintaining to keep the journey with an eight-cylinder, 5-liter compressor engine.

So they have both the eight cyl community but also the four cylinders, a lightweight, fun to drive.

In the case of the new F-Type hits the market, there are three different engines available. The beginning is the P 300, which is a four-cylinder turbo petrol engine that produces 300 horsepower, then is the P 450, V8, 450 horsepower. The best version is the F-Type R, and that features the V8 with 575 horsepower.

Like the predecessor, as the SVR version, this car is limited at 300 km/h. But, more important is the cars always come as standard with an 8-speed automatic gearbox from ZF. On top of this, the small one, you can buy as a rebel powered car. The best version always is an all-wheel drive, and in the middle, you can choose which one you prefer.

The engines and the drive powertrain is a 2-liter engine like the predecessor. But, it worked. There were many skeptics, and the fact is that half of the FSR you saw last year were four-cylinder cars. It's great, genuinely, fun to downsizing four cylinders, a sports car, and it drives well.

The Jaguar will be available in three different trim levels. So the base level will be F-Type.

It's vital to make a facelift a brand like Jaguar. The f-type embodies what Jaguar stands for. It's the essence of a Jaguar and real sports car, it's a gentleman racer as many people say, and for the real fans, it's the most beautiful coupe in the world. 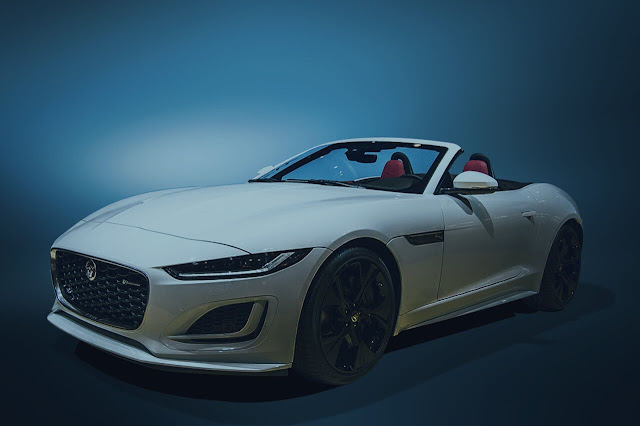 That's what many people think, so Jaguar introduced this count 2012, and they want to leap into the next ten years with F-Type.

People love it, and that's why Jaguar improved it. They changed the design, interior, driving dynamics, engine lineup, and they thrilled that F-Type will bring even more enthusiasts to the Jaguar brand.
Facebook Twitter