Continuously Variable Transmission (CVT)is different from traditional automatic transmissions because there are no conventional gears, and CVT has many microprocessors and sensors. 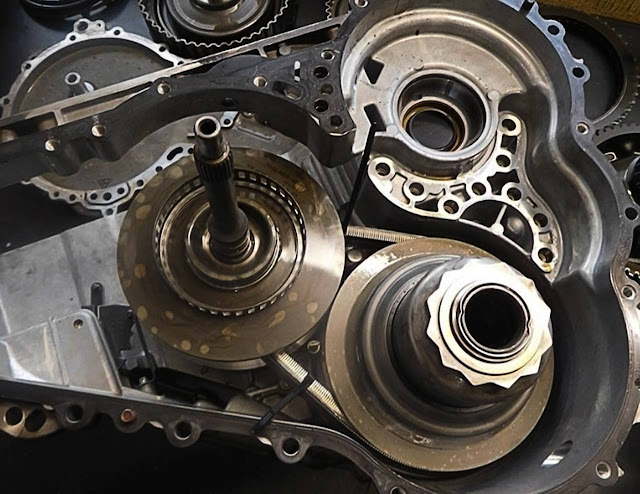 The key to how a CVT works is hydraulic pressure, springs, and centrifugal force to create the power needed to adjust two pulleys.

Although there are several CVT variations, the pulley on most passenger cars is parallel to the pointed end.

One side part of the pulley starts moving by a hydraulic cylinder and then moves the other.

Cylinders can increase or decrease the amount of space between the pulley’s two sides and allow the belt to be lower or higher along the pulley wall. This change depends on driving conditions and is related to the gear used.

For decades, three or four gears were considered sufficient for a car’s transmission.

Much older automation has only two speeds. At present, even automatic transmissions are capable of delivering eight, nine, even 10-speed. The following is an illustration of how the CVT transmission works through Nissan’s Xtronic CVT system.

You will be surprised because CVT is not a new idea in the development of technological systems. In the early 16th century, the genius Leonardo da Vinci create a picture that seemed to illustrate this technology.

The initial version of the CVT was a component of the first car, patented by Karl Benz in 1886.

Since the beginning, this transmission has not received a positive response from car users in its development. But this technology has been widely used for more than a century in industrial applications.

For example, this technology has been used in drilling machines and lathes. Recently, CVT transmissions were also used on private boats and snowmobiles.

In 1989, Subaru introduced the first advanced automotive CVT in the US through the Subaru Justy subcompact car. Then other car makers began developing their CVT technology throughout the 1990s.

The advantage of CVT transmission is that it creates an unlimited gear ratio. Therefore, the CVT can work to keep the engine at its optimum power, increasing fuel efficiency and mileage by providing an infinite seamless transition from low to high gear.

According to the American EPA (Environmental Protection Agency), CVT has an efficiency of 6 percent better than conventional automatic transmissions.

The most significant disadvantage of Continuously Variable Transmission is the pressure on the accelerator and rpm on the engine. Also, belt-driven CVT often provides less torque than an automatic transmission.

Read:  What Causes a Car to Backfire on Acceleration and How to Fix It Easily

Many people complain that this type of transmission is worn out quickly due to the high frequency of friction in the belt and other components.

But make sure always to choose a transmission that fits your expense and needs.

This Guy Has a Demon-powered Mustang in the Drag Race!

Ram TRX vs. Rivian R1T in Drag Race, Who Will Win?

Which Car is the Fastest In the World? Here’s The List For 2022!