Facebook Twitter
The all-new 2020 Chevrolet Corvette C8 Stingray is the most revolutionary Corvette ever, a brand new vehicle.

One of the main striking differences in the dramatic style because this C8 Stingray is the first mid-engine Corvette. 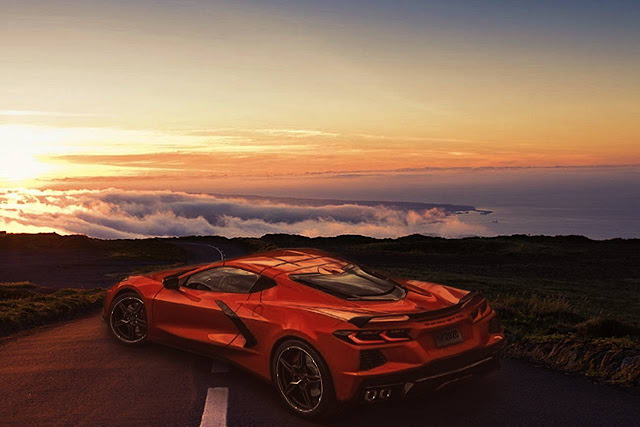 Anyway, the concept of a sports car with an exotic and sexy look has been around since 1960, and we'll tell you a little bit about that.


The History of Corvette Mid-Engine


As a leading racer, Duntov has long fallen in love with Corvettes. During his lifetime, he had the idea of designing a Mid-Engine on the Corvette to overcome the roadster's weaknesses. But in 23 years of a career with General Motors, it turned out that it did not go as he expected and contrary to the history of the Corvette. He felt he had failed to turn the Corvette into a mid-engine platform, and that made him frustrated for life.

Chevrolet is lucky because they still have Duntov's 11 prototype models as the beginning of the Mid-Engine. Chevrolet Engineering Research Vehicle (CERV) was the prototype in 1959, as the first V8 engine with 359 hp. Ironically this model has been secret for almost two years before appearing at the 1960 US Grand Prix. Duntov successfully drove it on Pikes Peak 60 times with an impressive record.

As a next step, Duntov created a Mid-Engine model that focused on the LeMans endurance arena. In 1964 they planned to produce six units of the CERV-I model. But the GM considers that Duntov's idea with its mid-engine platform is unconventional. As a result, GM had to withdraw all racing activities in those days. With that decision, they only made one CERV-II unit, which RM Sotheby had auctioned in 2013.

July 18, 2019, was the day Chevrolet wanted to realize Duntov's dream. Corvette C8 is the eighth generation of the Corvette family with the C code. C8 implements the Mid-Engine for the first time following Duntov's wishes. The figure of Duntov has become a new history for Chevrolet. Corvette C8 is more comfortable and enjoyable but still has the characteristics of Corvette.

Inspired by today's racing cars, the outside layout of the Chevrolet Corvette C8 Stingray 2020 mixes the futuristic, aggressive, and proportional body dimensions. Even GM's Global Design vice president claims that the Corvette C8 is America's best car in the Mid-Engine Sports Car segment at this time.

The Chevrolet Corvette C8 Stingray 2020 has three main things you need to know:


The new Corvette C8 vet is a bigger car than the previous c7 generation, it's almost 6 inches longer, and the track is 2 inches wider on each side. The vehicle does weigh around 200 pounds more, but the beautiful thing is it still looks like a Corvette even though the engine is in the middle.

The wheelbase has been stretched, and the hood line is lower, so everything on this car is functional. You have scoops to take in air as cooling for the engine and brakes.

You'll see the horizontal plane because the Department of Transportation standards wants to protect pedestrians as they are crossing the street.

You get a stylish LED daytime running light that surrounds a rectangular LED lamp. If you need a front license plate, the inset Corvette inset vanity plate pops out, and you can put the plate in its place.

Under the hood, Chevy enables you to open it from a small button below the touchpad. There's a surprisingly good volume of space under, it's not extremely large, but it's also great. Within the two trunks that you get with this vehicle, it's about 16 cubic ft of room, somewhat less than what you got on the old C7 Corvette vents. But it doesn't matter if you got a vehicle that looks as hot as C8.

You'll love the full-LED daytime running lamps, headlight, it is aggressive. You are talking about the iconic logo, back to 1953, when you can only get Corvette white with a red interior. You still had that cross flags, and another fun fact about Duntov is that he is the man who came up with the plan to put a V8 in a Corvette, which happened back in 1955.

So, from the front end, you'll like this car. C8 is going to have the data recorder so you could do your track days and get all that information.

As you come around the bend,  Corvette is going to be the first-time when it comes to options. Corvette C8 has many different wheel options and colors, even going down to brake calipers.

GPS is one of the biggest things that will separate C8 Stingray from a Ferrari, McLaren, and Bugatti. You could adjust the height to over a thousand locations, and it will memorize it. As an example, the curb in front is kind of high so that the car will remember that, and it's got a lift system. So, you don't scratch any of that beautiful bodywork on that lower curbing.

You have 19-inch wheels wrapped in Michelin 4S as these are run-flat tires large rotor with those calipers.


You'll love the beautiful side mirrors design because if you look at the side mirror on the passenger side, it sticks out further. The reason is from behind the seat; you need to be able to view it a little bit better than this one.

You can see the fine details, lower sill panel down low, and then one of the favorite parts of this car is the air intake. The actual framing for it starts on the door pan, and then that's going to channeling fresh air for the V8 engine as a split-level.

The great thing about a convertible C8 is a folding hardtop, which is new on a Corvette. Also, it only weighs 77 pounds more.


The wheels are getting a little wider towards the back, remember this is still a rear-wheel drive. Corvette has brought taillight design to the next level. Remember, for so many years, it was all about round taillights, and a lot of  C7 owners got all upset.

But the rear looks like a Swiss Camaro. Anyway, you'll like the functional gloss black, the quad exhaust on both sides are back again, the rear diffuser area is nicely set up, and the cool stingray logo in the back area.


The new generation 6.2L Small Block V8 LT-2 engine has officially become the operating engine of the Chevrolet Corvette C8 Stingray 2020. It can deliver up to 495 HP with 637 Nm of torque. The combination of low-end torque and high-end power makes the pedal response very good at each RPM. GM finally moved the engine between the front and rear axles because of this is a mid-engine car. The early C7 just simply was at the ends of how far power could handle being a front-engine design.


0-100 Km / Hour in only under 3 seconds, when applied together with the Performance Package, is an awesome power. The transmission is fascinating, and you get an 8-speed acceleration Dual-Clutch and New Electronic Transmission Range Selector DCT.


Corvette brought the interior to an all-new level, and the great news is you could personalize it to your tastes. Everything from steering wheels,  three various seat options plus all the tones stitching and trim is individual to how you want it set up.

One of the most significant things that are grabbing a lot of people's attention is the large dividers separating the driver from the passenger. In essence, all AC controls and everything settled perfectly. You do have the infotainment system screen with a gentle tilt to it, and it's all driver-focused.

The Driver's Oriented theme on the Corvette C8 dashboard is awe-inspiring. The Head Unit Panel is facing the driver, so you will be easier to get information and multimedia.

0 to 60 in Z51 trim around 2.9 seconds that is a breathtaking maximum speed, a 194 miles/hour taking the Corvette to another level. Chevrolet believed, the only solution to do that was to put the engine between the front and rear axles known as mid-engine.
Facebook Twitter