Often the driver ignores the blind spot even though it is the cause of high accident cases on the highway. We must realize if there are still many drivers who do not understand the blind spot areas. 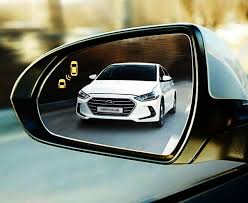 Maybe you often hear the term blind spot, or even have never heard it at all. However, you should know because it turns out from a study in the US, the cause of more than 800 thousand cases of accidents on the highway is a blind spot.

Some cases of accidents often occur because the driver of the vehicle is not aware of the blind spot. If their understanding is good enough, the driver can avoid accidents when there are moving objects that are not visible around their vehicle.

For this reason, we will share information about blind spots as a topic that you want to know as a car driver.

Blind Spot When You Drive a Car

So what is a blind spot? Just like the function of the human eye, when you drive, there are always specific points where your eyes cannot see the presence of an object or several around the vehicle.

A blind spot is an area near your vehicle where you, as the driver, can’t see it. Yes, the driver gets help from the mirror in the middle of the cabin and on the left and right, but there are still “hidden spots.”

The problem is when there is an object. For example, another vehicle or person is moving, and its position is in the hidden area.

So, the driver won’t see the obj enough, and when they don’t realize that if their vehicle is moving towards the object, the collision will be challenging to avoid.

Therefore, the role of enhancements such as rearview mirrors, cabin mirrors, and blind-spot warning or 360 camera features is significant.

Generally, the blind spot area is on the left and right sides of the vehicle.

While the blind spot on a small vehicle, such as a city car, sedan, or MPV, is on the back to the driver’s door or front passenger. However, large vehicles such as trucks have more blind spot areas.

The back of the truck is another area that is also at risk because the truck driver can’t detect objects that are behind the vehicle to a distance of 1-2 meters.

The blind spot will be reduced if the object dimensions are large enough or equal to the truck body. However, small objects such as bicycles, motorbikes, and people walking behind trucks will increase the risk of accidents.

How to Reduce Blind Spots?

Although the blind spot areas are familiar, it is not impossible to reduce these issues. Frequently accidents due to blind spots occur because of the carelessness of the car driver itself as not correctly adjusting the rearview mirror or driving recklessly.

So before driving, make sure the left and right rearview mirror position following your posture and your sitting position. You can adjust the direction of the rearview mirror.

So that it is parallel to the body of the car and leads to the outside of the vehicle, be careful not to display too much car body area in the rearview mirror, at least the rear window is visible.

Next, make sure you always look at the rearview mirror when your car will turn or change lanes. Make sure that there are no other vehicles at close range around you.

Don’t forget, turn on the turn signal before changing lanes or turning so that other drivers will understand what you are going to do.