Home Mercedes Mercedes-Benz AMG E53 4Matic 2020 is a New E-Class Facelift with an...

Mercedes Benz AMG E53 4Matic 2020 is a new e-class facelift, and this is a car that in the pre-facelift version has to be more Mercedes than it was AMG. But AMG has implanted even greater of their DNA into this car for this facelift.

This review will explore every new detail of the new AMG E53 4Matic, and we thought beforehand that we need to talk about facelift changes.

To do that, we have to go back before the previous car was in the model year, and it was W212 who started life with the old-style four eClass lights on the front. So when this car got facelifted, it had a new face.

They’re probably the biggest that Mercedes has ever done on the car design.

We think it gets an entirely new front fascia with one lamp still carrying the idea of having two lights in each light unit, but it is a single unit with an eyebrow graphic in it. The front end changed massively in that particular car.

After W212, you have the foreword of this car, which once again has a single unit. Still, significant two eyebrows in the car are back, carrying across the car fascia’s eClass design language.

But this car is too similar to the c-class and s-class, especially in the rear.

Now we move on to a facelift today, and it’s very different. You can see a significant change in this car.

You have a completely new, much smaller, and minimalist light unit. You still have Mercedes eyebrows in its design, and you will see two small dots of light in it. 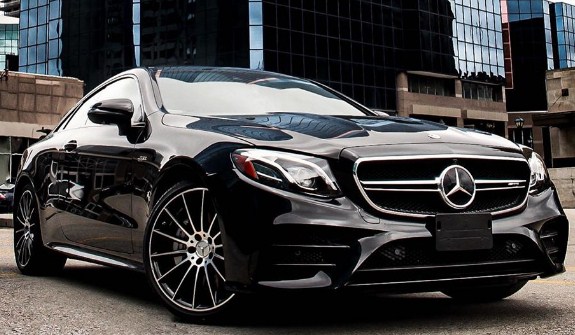 It links to the past E-Class, showing you that two lights inside the single unit mean eClass. It’s not very clear, and we wonder if the future of s-class and c-class will end like this.

Then you’ve got a double a wink design in the front like a typical AMG line. So the lower part with the vertical slats is one a, and other body-colored parts above it is another shaped, and you know if that is AMG design language. The vertical shapes looking very aggressive, and the side air intakes very similar to what we’ve seen in the past with the arrow flick.

The air intake isn’t fake, and that’s an aero feature because it pushes air into the wheel if you look behind.

You will see a power dome on the hood like in a more sporty coupe, but the shape is not the same as the E63. You only have the power dome structure on it but again, make the front look much more aggressive.

However, you will want to see the rear of this car.

We think this reminds us of the longer square lamp W212 on an E-Class, which has many fans. We like the fact that now it looks very different, terrific, but we don’t know for how long versus S-class or C-class.

Read:  2021 Mercedes-Benz GLA is an Affordable, Luxury and Sophisticated Crossover

Previously, on the inside of the lamp, you had a Stardust lamp in the e-class. Now you have light blocks there, the whole design is different and looks very good.

When we talked about this E53 in the pre-facelift, it started as an E43 with a V6 engine like in the C43. At that time, the V6 was an excellent growing engine, but design-wise didn’t have many AMG.

Next, the car was updated to the inline-six and called the E53 with the EQ boost.

But as far as the car’s actual design is not visible, especially in the sedan with a diamond grill like the rest of AMG’s entry-level. It just looks like an E-Class on the road.

But that is not the case with the new E53, and we want to make it very clear when we show you what the two are compared to each other because that is a huge difference. The E53 indeed looks like part of the AMG family now.

You have specific parts of the E53 on this car, a lower AMG diffuser, and inside, a typical entry-level AMG round pipe looks very nice and big.

On the side, you have a side skirt like yours e63. But this was not like in the E53 before. Once again, making the car look more extensive and aggressive from the side.

In front of you get a distinctive AMG grille, a unique style; this is not the same as what you saw before. A smaller grille with a gloss black border around it gives a unique style for the first-ever to the 53 AMG series.

The overall appearance is a much shorter car, and that’s because of the flat area in the front, some areas curved inward, sharp nose out, and the grille kind of slants. So, it looks much more c-class size, and the lights give you a minor illusion about that.

Overall it gives it a much more muscular and kind of broader look even though the body is no more extensive than the pre-facelift. So, it’s a brilliant design by Mercedes and AMG.

The design was one primary focus in the facelift as it usually is. But the other two concentrations in the e-class were brand new engines and intelligence.

Like the technology in E53, EQs use boost hybrid on many new engines for new e-classes.

In the past and this new model, you usually have an e450 4matic, an inline-six engine with a starter-alternator, and an electric motor that gives an extra hybrid boost. Now the e-class has two engine variants to come and more in the future.

Apart from the typical six-cylinder, you also have an inline-four diesel hybrid engine with an EQ boost-alternator starter, and it will approach 280 bhp, which will be the class leader in its segment.

Then you have a new debut engine on the new E53, an inline-four petrol-hybrid almost up to 270 bhp and again with some EQ boost. So much focus on hybrid and EQ boost on e-class facelift.

The difference is that you have an additional AMG dynamics package option, giving you some unique features. First of all, you get a red caliper that changes the design. You also get a full dynamic steering wheel and AMG steering wheel buttons.

The best part is that you get racing and drift mode for the first time on the E53 AMG. This car has a switchable rear-wheel drive drift mode, and you also want to get an extra sense of AMG when you drive this car in the future.

We have summarized the facelift changes on the standard E-Class AMG line and the new E53 that looks amazing.

In the interior, intelligence is one of the critical parts of this facelift. You want to focus on the MB UX, which is the top Mercedes OS in this car.

Finally, in this e-facelift, you’ve got the full-on MB UX in its most full version, where you’ve got passenger detection on the front end, touchscreen in terms of the front screen,  and a brand new touchpad.

In terms of shape, the diameter is still small in terms of the AMG steering wheel. You get a beautiful C-shaped paddle shift in aluminum that has an extraordinary range and looks fantastic. You have a thicker section at the wheel than any AMG you have ever had.

In the center of the wheel, there is a special AMG section made of aluminum. There is also an AMG drive control unit or AMG wheel button, which looks very beautiful with new graphics and functions.

You can choose your shortcuts on the left side and then switch the drive mode to the right side.

In the middle, you will see the biggest Mercedes star you have ever had. Maybe you think it is the first Mercedes airbag where you hope it is leather like the one on the s-class because it only looks too plastic in this format.

Another subtle change is the frameless rearview mirror, it’s just a piece of glass from the front, and it looks perfect. You get a new AMG SuperSport to look like in the GLE 63 S in terms of appearance.

You can also change the system’s appearance to be Classic, Sport, and the most popular for AMG owners is the SuperSport display.

You’ve also got the AMG exhaust system performance, which is so essential for only AMG owners.

The new Mercedes Benz AMG E53 4Matic 2020 got the best Mercedes operating system that they’ve ever made in the E-class, and much more AMG DNA added. Also, this car has a brand new steering wheel and more advanced driving assistance systems.

2021 Mercedes-Benz GLA is an Affordable, Luxury and Sophisticated Crossover

2021 AMG GT Black Series: The Wild Side of Mercedes is Back!